Similar to my first novel The Guardians of the Earth Type Planets, available also in Amazon Kindle, this second novel reflects my background as an American and Spaniard along with my love and interest in science fiction (Isaac Asimov, Aldous Huxley, Philp K. Dick, etc.), religions (the ones I grew up with) and everyday life.

Check my official trailer which tells the beginning of Sacnite’s adventure:

Planet Saha is going to be another victim of the war of religions with the arrival of the evil alien Somsak from the dead planet Grob.

Somsak uses religions in his scientific experiment to demonstrate how people destroy themselves with them. He already did it in his dead planet Grob.

One day in Seven Stars City, a girl named Sacnite Sanja encounters an alien called Siriporn who asks her to help him defeat Somsak and save the planet. Somsak immediately takes over the body of President Arnulf Serkan and rules in the political party DP, Dieu and People. Using his renamed green Dieu blood, Somsak creates evil monsters and attacks nonbelievers to start the war of religions making only the religion of his party, the Carrefour religion, as the only true one.

Will Siriporn save planet Saha with Sacnite’s help? Why the alien chose her from all the humans living in the planet? Who is Sacnite Sanja in reality?

The Guardians of the Earth Type Planets & Goodreads

In Goodreads you can find out extra information about my novel The Guardians of the Earth Type Planets, from quotations to all my trailers in YouTube! Also, just like in Amazon, you have a free sample with the first 13 chapters.

Posted by Carolina Cody Aldaz at Wednesday, June 27, 2018 No comments: 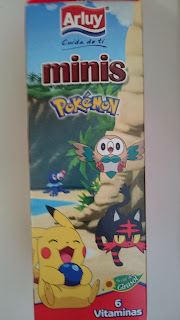 I found a new edition of Pokémon chocolate cookies. Who remembers Pokémon 3 the Movie about the little girl Mi trapped in a Crystal Tower?

Posted by Carolina Cody Aldaz at Tuesday, June 26, 2018 No comments:

The Guardians of the Earth Type Planets

Carolina Cody Aldaz
Carolina Cody Aldaz is an English teacher and science fiction author. She has an MA in Teacher Training for Secondary Compulsory Education and High School, Vocational School and Teaching Languages (Máster Universitario en Formación del Profesorado de ESO y Bachillerato, FP y Enseñanzas de Idiomas) at Complutense University of Madrid. In addition, she has a BA English Philology at Universidad de València, one Erasmus year in the University of Nottingham, and a TEFL diploma from TEMadrid. Because she comes from a North American and a Spanish family her work reflects the reality of both the USA and Spain. Science fiction is a genre that has always interested her since it made her wonder about many questions in life, people's future, and how this genre brings to light the best and worst of the human mind. Other genres that influenced her work are fantasy, horror and manga literature for the imagination is the best thing to explain reality.